Start a Wiki
The Starting Area is a gigantic ruin used at the starting point and the finish line for each of the Pre-Selections on Alwas.

Facing the huge seating area, which was dug directly into the cliffs of the island, stands a fine wrought cupola. In its center sits a gigantic display panel with a complex wheel system. It's at the top of this building that the Avatar appears during key moments of the competition, and at the foot of which sit the three Scrub judges in charge of supervising the races.

Between the bleachers and the cupola spreads the vast esplanade where the contestants line up for the start. A heavy triple door made of stone gives access to the various race tracks via a canyon. Opposite, another door, this on in ruins, shows the beach and the long straight line which concludes each of the races.

The starting area in the rain

The starting area at night 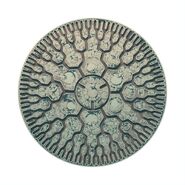 The Avatar on the cupola.

View of the Starting Area from Molly's window.
Add a photo to this gallery
Retrieved from "https://oban.fandom.com/wiki/Starting_Area?oldid=5024"
Community content is available under CC-BY-SA unless otherwise noted.