Start a Wiki
The Scrubs are the native inhabitants of Alwas. They are small, bipedal, octopus-like creatures with a beige fleshy coloring and darker brown markings on their heads.

Despite the local legend which states that their ancestors were great warriors (and the hopes of rebirth which are secretly cherished by some of their leaders), today's Scrubs are above all a peaceful and agricultural civilization. They feed on the algae they grow in the paddy fields in the center of their island, and the fish and small shellfish they catch on the beach.

To compensate for the total lack of raw material on their islands, the Scrubs have tamed various types of big caterpillars which serve as livestock and even pets. The caterpillars lay broad egg-shaped objects that the Scrubs use to construct their dwellings.

The primary hosts for the race on this planet, their elders are opposed to the use of technology, but allow it so long as it is not done publicly. This is how Flint, their local pilot, went about building and maintaining his ship. 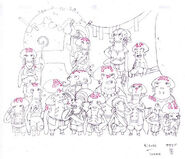 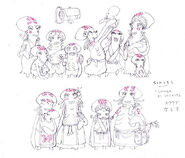 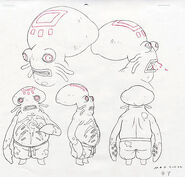 Scrub Shaman
Add a photo to this gallery
Retrieved from "https://oban.fandom.com/wiki/Scrubs?oldid=5129"
Community content is available under CC-BY-SA unless otherwise noted.