Start a Wiki
Prince Aikka (アイカ王子 Aika ōji) is the prince of Nourasia. He races on the back of a giant flying beetle named G'dar, which acts as his vehicle. Noble, chivalrous and skilled in martial arts, he is a rival of Molly's, but also a close friend — since Molly finds him cute and the attraction seems to be mutual.

A dazzling archer endowed with magical powers, the handsome Prince of Nourasia rides a faithful giant beetle for a ship. Though he belongs to a rival team, Aikka will develop a deep bond of friendship with Molly.

Aikka is the son of King Lao and Queen Nori, the rulers of the Kingdom of Nourasia, and is the only heir to the throne. Aikka left the royal palace and began his training to become a man at age 7, as is customary in the Nourasian Court. His training included the study of magic, martial arts, and how to ride a Giant Beetle. He formed a close bond with his mount G'dar, and his fencing master, Canaan, became like a second father to him.

Nourasia, Prince Aikka's home planet, was threatened by the Crogs just as Earth was. As a result, the Nourasians were forced into an alliance with the Crogs, making them unpopular with humans.

Aikka entered the Great Race of Ōban in the hope of winning the Ultimate Prize to save his kingdom from the Crogs. With G'dar as his ship and Canaan at his side, he travelled to Alwas for the Pre-Selections. On the first day he met Molly, but their introduction was cut short when Aikka was called off to fly in the first race of the competition, which he won. A few days later, Aikka encountered Molly again at the local tavern. She and Jordan had gotten into a fight with Grooor and were losing. Aikka intervened and defeated Grooor. While Molly was grateful, Jordan was not and insultingly called Aikka a "Lapdog of the Crogs." Offended, Aikka was about to fight with Jordan but left the tavern instead.

Aikka later became one of the six pilots who qualified for the Playoffs. He flew in the first race of the first round against Spirit, but lost when Spirit cut G'dar's leg with his sharp wings. He spent the rest day training with Canaan until Molly showed up unexpectedly. She wanted to talk with Aikka, but Canaan accused her of spying and scared her off. Aikka caught up to Molly outside and managed to calm her down. They had a few minutes of time alone together before Aikka was called back to his Pit.

However, Aikka's new friendship with Molly was tested the next day. They were to race each other, and he had been ordered by the king to eliminate her. Molly and Aikka promise each other that during their race they would not use weapons against each other, but near the end Molly is unable to prevent Jordan from firing. Aikka feels betrayed and gains a distrust of humans. It is later shown, however, that Aikka still cares for Molly and would even come to her defense if he felt she was threatened, such as in her race against Spirit. When Molly crashes and Spirit approaches her unconscious form, Aikka leaps from the spectator stands and flies to her on G'dar, ready to shoot at Spirit if he tried to hurt her.

After the Earth Team defeats Colonel Toros in the final round of the Pre-Selections, the Race Judges proclaim that the team's fate will be determined by a rematch between Aikka and Spirit. If Aikka wins, the Earth Team can progress to Ōban. Toros wants Aikka to lose on purpose to prevent this, but Aikka rebels and wins the race, allowing the Earth Team to stay in the competition.

Aikka is one of the nine Ōban finalists, and appears to have forgiven Molly's "betrayal," but still holds a grudge against Jordan, apparently realizing who was actually responsible for shooting at him. Aikka and Molly's friendship continues through interactions during the first few races. Jordan eventually is brought into the circle when he saves Aikka from a large spider like creature during the first race. In the episode "Nervous Like Ning And Skun" Aikka, Jordan, and Molly fly off on G'Dar to explore a gathering of Drudgers. Later on, however, Aikka is pressured by General Kross to cut ties with the Earth Team and eliminate them, as the Crogs have invaded his world and hold his family captive. He finally succumbs and disables the Arrow III during a race in the mountains. Although he begins to drift from the Earth Team and lose their trust, he later abandons a race and goes looking for Molly after the Arrow III crashes. During the final race, he confronts Molly and Jordan and apologizes, and suggests they defeat Kross together. Even before the race he had attempted to speak with Molly and fix their problems. At the end of the series, Molly and Aikka share a hug and he promises to show her his kingdom one day.

As a Nourasian Knight, Aikka has a very deep rooted sense of honor. This being his defining trait through the series and his actions. This honor often conflicts with his sense of duty as Heir of Nourasia, as what the Crogs demand of him to defend his people flies in the face of his honor as a Nourasian Knight. As the series progresses he is seen battling himself over this, often giving in to the Crog's demands in order to defend his parents. He seems to have strong feelings for Molly, even if it isn't romantic as he shows great care for her and even defies Colonel Toros, and later General Kross, in favor of her at times. The prince despite being peaceful in general is dangerous through his archery skills, swordsmanship, and skills with a bow. 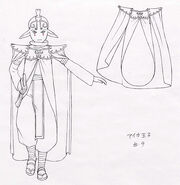 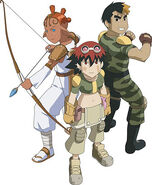 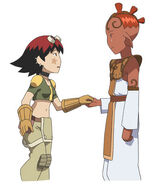 Aikka, Rush, and Marcel in the Pit Area
Add a photo to this gallery

Retrieved from "https://oban.fandom.com/wiki/Prince_Aikka?oldid=5211"
Community content is available under CC-BY-SA unless otherwise noted.