The Flying Temple of the Avatar is at the center of the competition on Oban. It shelters the nine teams, releases the star-racers on the surface of the planet at the beginning of each new race, and picks them up when they finish so that each team can rest and complete any necessary repairs.

The flying Temple consists of a 656-feet high central column, around which nine smaller modules revolve. All are connected to the central column via magical portals.

The gigantic column is decorated on the outside with the three symbols of the Avatar, which light up to announce the beginning of each new race. In the center of the building stands a vast garden, encircled with nine immense arches. It's from the middle of this garden, above the lake, where the Avatar appears to the competitors. This is also where the display panel of the Grand Finals stands: nine stone columns, one per finalist, which are drawn out of the water according to their respective rankings.

The contestants do not normally have access to the other levels of the Central Column. These are riddled with concealed alleys and secret rooms, including the residence of the incorrigible Satis, who was promoted to "Spokesperson of the Avatar" on Oban.

One module is allocated to each team in the final. The star-racer is stored in a large room at the back. The base of the module opens out of the blue at the beginning of each new race, and sets the ship directly on to the surface of Oban.

The team members live in small rooms dug directly into the stone in the upper floors. If the pits of Alwas were spartan, the modules of Oban are virtually ascetic!

The lake in the Temple's garden. 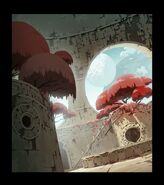 Inside the Earth Team module.

The Avatar appears in the garden 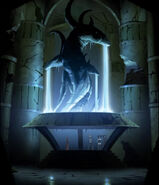 Fountain on the hidden floor

Satis's room
Add a photo to this gallery
Retrieved from "https://oban.fandom.com/wiki/Flying_Temple?oldid=4539"
Community content is available under CC-BY-SA unless otherwise noted.