The Earth Team Pit is where the Earth Team resides on Alwas during the The Pre-Selections. The pit comprises five levels, connected to each other by a circular central lift.

This is a huge warehouse where adjustments and repairs to the Arrow are carried out. A robotic arm mounted on a central axis makes it possible for the heaviest mechanical parts to be moved. An additional room situated at the back contains Stan and Koji's workshop.

This is an intermediate floor which opens directly onto the top of the warehouse. It has a common room, used as much for briefings as it is for meals, a cloakroom and a small kitchen. Behind this is the control room where the team can follow the performance of the Arrow during the race. Cluttered with screens and electronic equipment, this is the nerve center of the pit.

This is the first level of living quarters, and includes a shower room and three bedrooms, which radiate out from the central lift, Molly's bedroom, ridiculously small compared to those of her teammates, looks like a cupboard!

This space is reserved for the star pilot of the Earth Team, Rick Thunderbolt. Mini-bar, double bed, Jacuzzi and gym -- the preferential treatment is easy to see.

Offering a panoramic view over the test track and the Starting Area, this serves as Don Wei's office. The stripped but refined Japanese fittings (varnished wooden desk, tea table) reflects the personality of the manager. This is where he regularly speaks with President McMullen via Interlink, a pioneering long-distance communication system which was given to the Humans by one of their extraterrestrial allies.

The Hangar viewed from the entrance.

The Hangar from inside

Para-Dice hiding in the workshop.

Molly at the entrance of the Mezzanine.

A meeting in the common room. 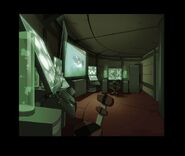 The Control Room in use.

Rick in his bedroom.

Rick in his bathroom.

Don Wei in his office.

Another view of Don Wei's office.
Add a photo to this gallery
Retrieved from "https://oban.fandom.com/wiki/Earth_Team_Pit?oldid=4354"
Community content is available under CC-BY-SA unless otherwise noted.