Start a Wiki
Alwas (spelled as Arouas in French) is one of the three planets equidistant from Ōban on which the Pre-Selections of the Great Race of Ōban are held. It is the most important one of the series (and also the one we know the most about) because it is the one on which the Earth Team qualifies itself.

Alwas has two moons and is a tropical blue planet, primarily consisting of an ocean that covers its entire surface except for a few archipelagos. Its inhabitants are the Scrubs.

The qualifying rounds take place on the largest island; Dragon's Back Island, the cradle of civilization for the Scrubs.

Once they land on the sea, the Avatar's ships drop the rival teams on the quays belonging to the large port on the island. This old and massive harbor is a sign of the planet's glorious and largely forgotten past.

Always lively night and day, the large tavern in the port is one of the few places where the Scrubs and the competitors rub shoulders. The reason why is simple: more than three hundred different cocktails are available on the menu.

The Canals and Paddy FieldsEdit

The Scrubs cultivate algae from the paddy fields, which they eat as a staple diet. The long irrigation canals that furrow across the island also serve as race tracks during the qualifiers.

Alwas is also home to several old and monumental ruins. Totally uncared for by the Scrubs, these stone temples are yet another relic of the planet's great past, and maybe even its mysterious connection with Ōban. 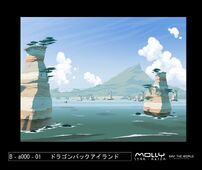 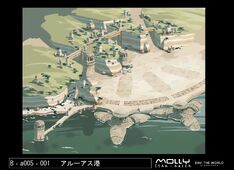 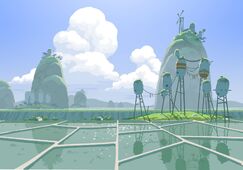 The Canals and Paddy Fields 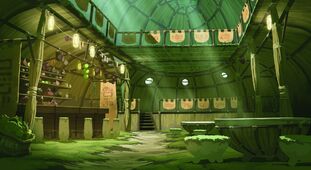 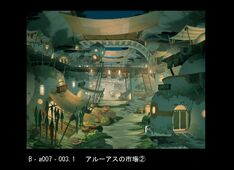 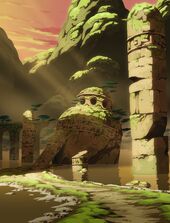 The Old Ruins
Add a photo to this gallery

The pits for each different team are gathered like an Olympic village, on a plateau which overlooks the Starting Area--the arena where each new race begins. These modern prefabs are composed of a broad hangar capped by a housing tower, which clearly contrasts with the rest of the landscape. The interior design is stripped to the bare minimum--more like the hold of a steamer than a four-star hotel.

This gigantic ruin is used as the starting point and the finish line for each of the pre-selections.

Retrieved from "https://oban.fandom.com/wiki/Alwas?oldid=5049"
Community content is available under CC-BY-SA unless otherwise noted.